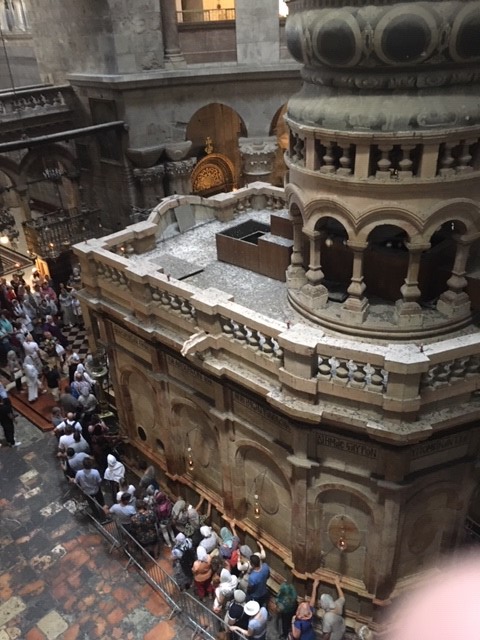 Christos anesti! Alethos anesti! Christ is risen! Indeed he is risen! When in Jerusalem, speak….Greek? Yes, at least for the traditional Easter greeting. Today is Western Easter, and next Sunday will be Orthodox Easter. Two Easters in one holy city multiply liturgies and double the shouts of joy. The crown of any Christian pilgrimage is a visit to the Church of the Holy Sepulchre. Consecrated in 339 AD, the church rebuilt in the 12th century still encloses the rock of Calvary and the rock-cut tomb of our Lord. Having come from across the world to stand in this church, pilgrims eagerly wait in line to enter the tomb in the great rotunda to kneel and pray at the marble-lined ledge where tradition says He lay. The tomb given to Jesus was largely destroyed in 1009 AD, and it was thought until recently that little of it survived. But several years ago the little building, the “edicule,” over it was studied, cleaned, and strengthened and something marvelous came to light. As stone coverings were removed for the first time in hundreds of years, more of the original bedrock tomb was found to exist than was known. The tomb itself, we might say, was newly born. The pinkish limestone of the edicule emerged from the soot of ages, and steel girders holding the edicule together were removed. The message of the resurrection, however, is not about a building, though that is where it has been celebrated for 1700 years, but about the power of God to bring from destruction, sadness, and death newness of life. And the deeper our distress, the sadder the world’s situation, the more loudly Christians must proclaim and enact the good news of hope and promise. Each of us emerges on Easter from Lenten dust and our true selves are revealed. We are strengthened, rooted in the rock of our salvation, newly born into Christ’s risen body. Alleluia! Christos anesti!