About Us
St. George’s College, Jerusalem, is an Anglican community of education, hospitality, pilgrimage, and reconciliation. Through study, site visits, engagement with the local Christian community, prayer and reflection, lives are transformed and faith renewed. 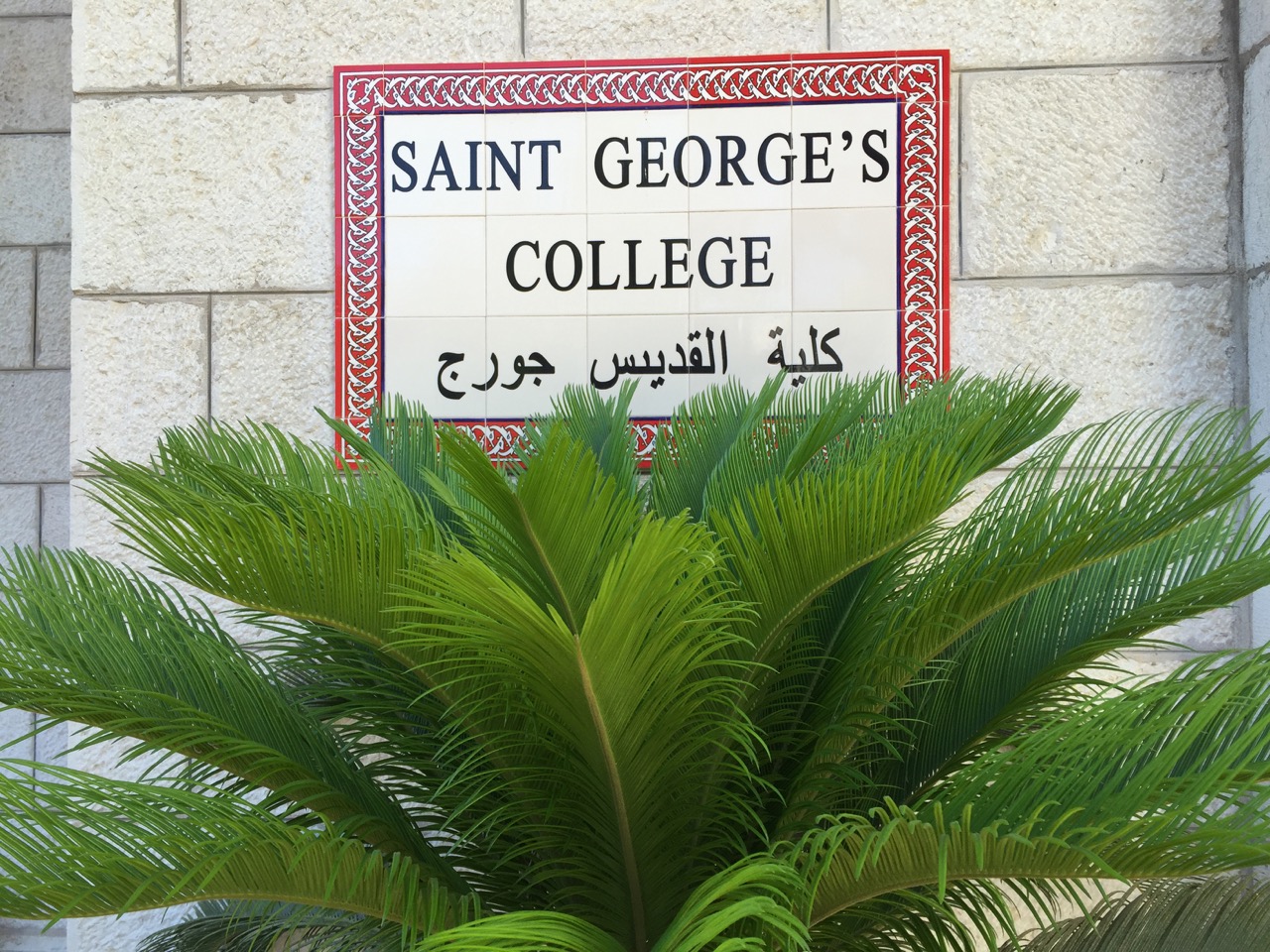 St. George’s College is the Anglican study pilgrimage centre in Jerusalem welcoming English-speakers from across the world. The College is part of the complex that includes the Cathedral Church of St. George the Martyr, St George’s School, the Pilgrim Guest House, and the offices of the Anglican Archbishop in Jerusalem.

St. George’s College will proudly celebrate its 100th year in 2020. Its length of service and unique context mean we offer a place where clergy and lay people from across the Anglican Communion as well as a variety of other traditions, can share in a short-term experience of community, pilgrimage, education, interfaith dialogue and reconciliation.

Jerusalem is not only a meeting place for Christians from around the world.  As a home as well to Jews and Muslims, it offers rich possibilities for interfaith engagement for those who visit. All of the College pilgrimages provide encounters with local churches and address the historical and current complexities of the Abrahamic faiths in the land through presentation of interweaving narratives.

Finally, the College serves as a resource for the clergy of the Diocese of Jerusalem.

Through service to the Anglican world and beyond, St. George’s College aims to fulfill its mission:

The College’s modern, three-story building can house up to 40 residential guests at any one time.  Its well-appointed sleeping rooms, “smart” classroom, common rooms, rooftop recreational area, and lovely gardens provide a perfect home for pilgrims intent upon an engaging stay in the Holy Land unlike standard tours or pilgrimages.

The Archbishop of Canterbury, the Most Reverend and Right Honourable Justin Welby, is patron of St. George’s College.

I am delighted to be here today and I bring with me blessings from The Archbishop of Canterbury as we celebrate 100 years of St George’s College.

It was wonderful to visit Bethlehem yesterday where Christmas is still very obviously being celebrated. Back in London Christmas seems a long way away – for the world the work of Christmas is done.  The Christmas trees are down, and Easter eggs have appeared in the shops but of course for the Church the Christmas Season is still underway and not over until Candlemas on February 2nd.

When I was a Canon Treasurer at Salisbury Cathedral in England, every year there would be a tussle between the Canon Precentor who wanted all the Christmas trimmings left up until the 2nd February and the Dean who felt that because the world had moved on by the first week in January everything should come down.  The compromise was that everything was taken down except the enormous 32ft spruce fir tree with its 10-inch diameter trunk at the west end of the Cathedral which remained until the 2nd of February.  With the tree being up since the end of November, the choristers had to pay special attention as they sung the antiphon for Candlemas at the West End. For one touch of the tree would send the remaining needles scattering across the cathedral floor leaving a 32 ft skeleton.

Unlike the skeleton of a tree in Salisbury Cathedral this is a season of generosity; of gifts, of wine out poured; of love declared from above and songs of hope but it also the season in which we journey from the vulnerable baby in a stable to the young man on the cross.

Our readings before us are about the disclosure of Jesus’ identity, the nature of the generosity of God’s kingdom and our call.

Advent, Christmas and Epiphany are seasons where light and darkness dance with each other as we proclaim that God is with us – Emmanuel and that the light shines in the darkness and that the darkness will not overcome it.  Isaiah declares to us that the people who walked in darkness have seen a great light; those who lived in a land of deep darkness— on them light has shined.

Now we are in the season of shadows. It is the season of the year when light is scarce and shadows and darkness reign.  Shadows – we recognize their presence. We have come face to face with shadows throughout this last year – political and economic uncertainty, persecution and struggle here and across the world. There may also be shadows in your own lives.

Jesus grew up in a kingdom movement here in this land. The Romans had conquered about sixty years before Jesus was born.  They were in a long line of pagans’ nations to do so.  They installed Herod the Great, and then his sons after him. He was born into oppression as many who now live here are. Most Jews resented this and longed for revolt.  But the revolt they sought was of the standard kind: military resistance to the occupying forces, leading to take over of power.  They looked to God’s Messiah to launch some kind of movement that would sweep him to power, privilege and glory. Fighting darkness with darkness.

In contrast in Jesus we see one who is called to bring God’s light to the world.  And so, Jesus’ early preaching comes out of the prophecy of Isaiah which speaks about the people in the dark being dazzled with light. And the prophecy goes on to tell us for a child has been born for us, a son given to us; authority rests upon his shoulders; and he is named Wonderful Counsellor, Mighty God, Everlasting Father, Prince of Peace. The zeal of the Lord of hosts will do this. And we look with hope knowing that zeal of the Lord of host will do this.

The kingdom of God seems folly to the world. Strength in weakness, gaining by losing, the power of the cross – foolish to those who measure strength by national product and personal wealth and power.

We must not be misled into believing that we have it right within the church. The Church is not exempt. We have sometimes been quick to form different Christian tribes to seek power in our own strength to look for winners and losers.  We have too often shut our doors to those we should have flung them open to.  And as we do, we draw explicit and implicit categories which indicate who is ‘in’ and who is ‘out’.  Who is right and who is wrong.

And Paul appeals to us brothers and sisters, by the name of our Lord Jesus Christ, that we should be in agreement and that there should be no divisions among us, but that we being united in the same mind and the same purpose. Let us not under estimate the challenge of this task.

As we enter the Week of Prayer for Christian Unity our challenge in this time is not to pretend that we are all alike. We clearly are not. But to recognise, and hopefully learn in some small way to overcome our intrinsic nature which pushes away others and tries to carve out territory only for ourselves but rather to see our context in wider context of God where we, even the one with whom we disagree, are made in the image of God.

For over 100 years St George’s College has welcomed course members from many countries and of different faith traditions.

With a heart to be a Holy Land centre for formation of faith, presenting the Christian faith through the Anglican tradition in the context of the land, the people, and the traditions from which it arose. You know what it is to seek the kingdom of God recognising your differences but seeking unity under Christ Jesus.

You are to be congratulated for your work of education, hospitality and reconciliation which has sought to recognise diversity but seeks unity under Christ. And you know that this is not easy and takes an intentionally, tenacity and it comes at a cost.

It is a vision which may be tested in the next 100 years, but I would urge you and us to remember that it is Christ which unites us to one another. We need to remember that unity does not mean uniformity. There are huge differences between us – there must be if we are to be the body of Christ.

If our image of the body, which is unified under Christ allows for diversity, it recognises that diversity and difference exists and finds space for respectful disagreement.

The image of the body reminds us that each part of the body needs to be motivated by charitable love, seeking the health of the body rather than one’s own glory – there is no more excellent way.  It is this excellent way which we are exhorted by Paul to follow.

As we journey from the vulnerable baby in a stable to the young man on the cross what is manifest in Jesus Christ is God’s most excellent way.

The message is just as urgent today and Matthew would want to say to us that the kingdom which Jesus established through his own work and his death and resurrection now faces us with the same challenge.

When the song of the angels is stilled
And the star in the sky is gone
When the kings and princes are home
And the shepherds are back with their flocks
The work of Christmas begins:
To find the lost
To heal the broken hearted
To feed the hungry
To release the prisoner
To rebuild the nations
To bring peace among the people
To make music in the heart.