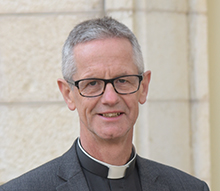 Dean Richard Sewell is British and has previously served as a priest in the Diocese of Southwark in the UK. His last post before moving to Jerusalem was as Team Rector of Barnes Team Ministry which comprises three churches in South West London.

Richard was ordained priest on the Feast of St Francis, 2003. He trained for ministry at SEITE now St Augustine’s College. He also studied Theology at the University of Birmingham for his B.A. He did further studies at Heythrop College for an M.A. in Biblical Studies.

His first encounter with the Holy Land was working as a volunteer for the Church of Scotland Hospice in Tiberias (now The Scots Hotel) in the 1980s. For three years he ran an Inter-Faith Project in East London.

Prior to ordination Richard worked for the Anglican Mission Agency, USPG, as a mission educator with additional responsibilities for USPG’s relationship with the Churches in Pakistan and Bangladesh.

JulieAnn, his wife, is a Primary School Counsellor and for the time being is continuing in that role until she can secure a job in Jerusalem to enable her to join her husband. Their adult children, Nathaniel and Eliana, continue to pursue their careers and studies in the UK.